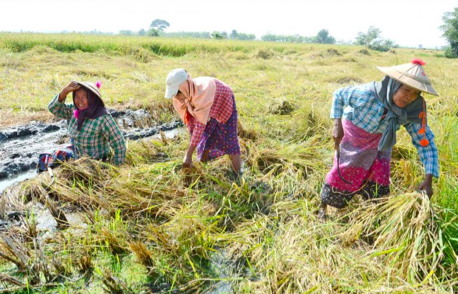 Earnings from Myanmar’s agricultural exports have fallen by around 20 percent since the NLD-government took office in 2015 due to a lack of planning, technological progress and policy direction, insiders said.

The fall in export earnings also coincides with a widening trade deficit and dearer exchange dollar exchange rate, which should make the country’s exports cheaper and more attractive to international buyers.

Yet, “there has been little change in the agriculture sector and implementation of new policies has not been very effective. Some have even introduced more difficulties for farmers,” said U Soe Win Maung, adviser to Myanmar Pulses, Beans & Sesame Seeds Merchants Association.

While the number of loans available by the Myanmar Agricultural Development Bank has increased, for example, farmers face the additional hassle of having to fill up forms and complete other administrative processes. Meanwhile, it is not uncommon for loan disbursements to take longer than expected, so farmers end up receiving the funds after they are needed.

In Myanmar, agriculture accounts for 37.8pc of the country’s GDP. The bulk of exports from the agriculture sector comprise rice and a variety of pulses. Yet, export earnings from the sector between April and August are down by US$186 million to US$1.1 billion for the period, which is a decrease of around 15pc year-on-year. For the full 2017-18 fiscal year ended March 31, earnings were down by slightly more than 20pc compared to the previous year.

Among the reasons for the drop in earnings include floods that took place in the country during the monsoon period between June and August, which destroyed hundreds of acres of crops in Bago, Mon and Tanintharyi.

A steep drop in prices as a result of the import quota set by India, by far the largest buyer of Myanmar beans and pulses, also set the country back in terms of export volume and revenue, said Dr Myat Soe, official from Myanmar Pulses, Beans, and Sesame Merchants Association.

The decreasing rate of income from agriculture exports isn’t just a result of unfavourable weather conditions or a drop in foreign demand. It is mainly due to the lack of strong government policy support and direction, industry insiders said.

Besides the issues involved in obtaining loans, the availability of quality seeds to add value to exports is still less than 1pc per acre. “The authorities say Myanmar should prioritiese the agriculture sector, yet they have not put in sufficient effort to upgrade the quality of the country’s agriculture produce by providing better access to quality seeds and support to improve cultivation,” said Dr Soe Tun, vice chair of the Myanmar Rice Federation.

U Soe Win Maung pointed out that poorly-regulated and ill-informed usage of pesticides and fertilisers may also impact demand for Myanmar-produced crops if new policies setting a standard for the use of such chemicals are not implemented.

U Myint Swe, former deputy general manager of the Department of Agriculture, agreed. “It is important for Myanmar to export good quality crops. If the country develops a reputation for exporting sub-standard products, import demand and earnings could be badly affected,” he said.

The way Dr Soe Tun sees it, “the government needs to offer more incentives encouraging farmer and traders to export higher volumes of crops. They need to lower taxes and provide better access to pedigree seeds and new cultivation techniques. They should also make it easier to do business along the entire supply chain. This will also draw more interest from foreign investors,” he said.

“If the government cannot do this, it should implement policies that make it easier for the private sector and foreign investors to offer support,” U Soe Win Maung added. Currently, foreign direct investments (FDI) in the agriculture sector represent just 0.5pc of total FDI in the country.

For its part, the government recently launched the Agricultural Development Strategy for 2018-2023, which focuses on good management, productivity and competitiveness in the sector. The plan is expected to boost private sector interest and encourage farmers to network to improve the market infrastructure and exchange information.

However, “no practical implementation of the strategy has been initiated,” said Dr Soe Tun.

Farmers and traders must also gain better understanding of global market trends and demand to stay in business. “Farmers are the most affected when the market for a particular crop is not good. So, they need to be able to foresee the trends in major markets like China and India so that they know what types of crops to grow to meet demand,” said U Myint Swe.

Unfortunately, most farmers, especially those from the rural areas, are not aware of market trends, U Myint Swe said.

All that is taking place even after the kyat has lost more than 10pc of its value against the dollar over the past four months. On September 17, the Central Bank of Myanmar set its reference exchange rate at a high of K1,540 per dollar.