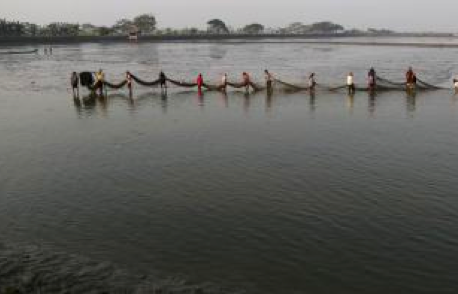 Fish breeders struck by heavy rains in Yangon region in August have been promised new larvae in a bid tohelp the industry recover from the floods, the Fisheries Department has said.

The national government is working alongside regional officials to make the deliveries, said U Tun Win Myint, of the department’s Yangon Region branch, at a meeting late last month.

“The Chief Minister of the Yangon Region Government and the Vice President are discussing assistance to flood-hit areas,” he said. The Union Government will use cash from the state coffers and regional governments will draw on money from a natural disaster fund, he added.

The Yangon government will spend K15 million (US$11,800) and the Union Government will use K17.2 million from the state fund for the larvae project, which officials said will cover 30,000 acres of fisheries.

Myanmar’s fish breeding industry is estimated to have expanded by 250% in the last 10 years, despite its reputation for being slow and unproductive and setbacks caused by natural disasters.

A February report by the Livelihoods and Food Security Trust Fund underscored the industry’s importance to the rural economy; commercial fish farming nurseries can produce up to ten times the amount of income generated form mango or rice paddy farming.

U Tun Win Myint said each breeding farm hit by floods in Yangon region will receive 1,000 fish larvae, while farms in other areas will each receive 500 larvae.

The fisheries department said it will host a seminar in Twante township in October on preparing for natural disasters in the fish breeding industry.